Planning a safe room in your house or apartment

A safe room provides a protected space that allows multiple people to shelter in place safely isolated from airborne toxins like radioactive fallout or chemical spill vapors, malicious people, and weather events. You can easily create one in your home or office with a Safe Cell NBC filtration system and an assault resistant door.

The Safe Cell is a broad spectrum overpressure air filtration system. It will filter out radioactive fallout, biological toxins, and warfare gasses. It will also create and maintain positive pressure in your safe room, relative to the outside pressure. This is called overpressure. It compensates for any small leaks in your safe room because all the air is flowing outward. 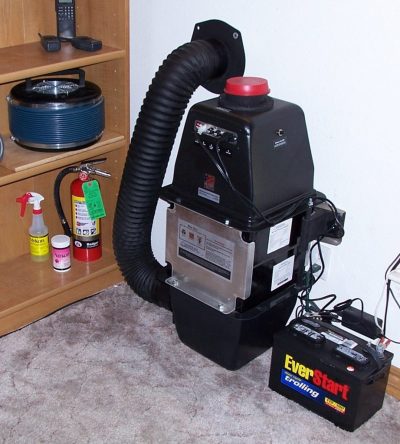 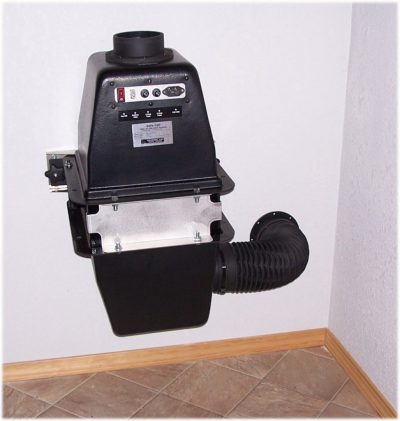 A nuclear, biological, and chemical (NBC) safe room protects the occupants from inhaling harmful or deadly airborne toxins such as very fine particles of radioactive fallout, biological toxins, and chemical agents. In the past, the United States Government has poured extensive resources into providing the best information for the protection of its citizens from NBC warfare agents. This is not the case today.

For protection of the U.S. population, the government suggests duct tape and plastic, then wait for further official instruction. Although the tape and plastic method would offer some immediate short term protection from low level toxins at low concentrations, it would be, at best, a short term solution. Most governments tend to only recommend emergency procedures that can be afforded by all their citizens.

As a contrast to most governments, both Switzerland and Israel require, and subsidize the cost of, NBC safe rooms and blast shelters in residential dwellings and commercial buildings. They have strict standards in place governing both the construction of the room and the ventilation equipment protecting the room. 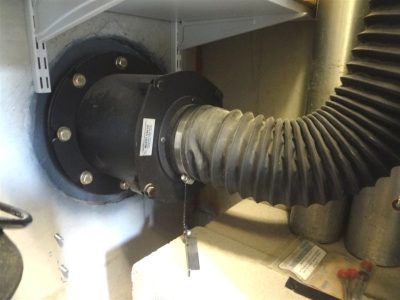 For protection of some of our military personal and government officials, the U.S. Department of the Army – Corps of Engineers has standards by which NBC airborne toxic free areas must comply. These standards dictate the differential pressure (overpressure) in the safe room (protected space) as well as the design of the NBC filter/ventilation system.

The main reasons why an un-pressurized room will not protect the occupants for very long is that the room “breaths.” In other words, it leaks air both in and out through the cracks as the external atmospheric pressure fluctuates – due wind or other atmospheric variables like temperature and barometric pressure swings due to approaching weather fronts. Air constantly tries to normalize its pressure and temperature between different variants As it does this, it brings with it whatever that air contains. Also, in a sealed room, there is no accommodation to replenish oxygen and expel the exhaled carbon dioxide of the occupants.

In order to create and maintain overpressure as well as give the required air exchanges to support the air supply needs of the sheltered occupants, a safe room must be equipped with true positive pressure NBC filtration system and a means of a metering the exhaust air out of the protected space.

The Safe Cell line of filtration systems and their related components are designed and manufactured specifically for this purpose. 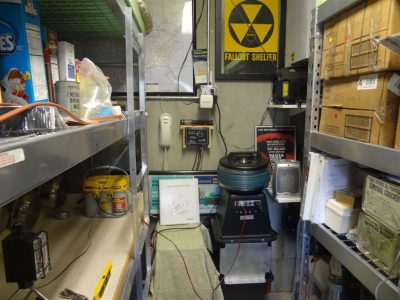 A safe room consists of an envelope (a room) that has a true NBC filtration system installed that will maintain more air pressure inside the room than outside of it (overpressure) in order to constantly keep air blowing outward from the protected space. This will not allow airborne toxins from migrating back into the room and your lungs.

With the right equipment, standard residential construction – homes and apartments – can be a perfectly suitable envelope to keep out airborne toxins. Absolute sealing of the room is not necessary – as long as you have achieved and maintain overpressure.

Even if you are inside a hermetically sealed container, you need true ventilation – air in and air out. This ventilation continually removes moisture, heat, and carbon dioxide that is exhaled by the occupants while bringing in a fresh supply of oxygen-rich air.

This air must be filtered in order to make it safe and breathable. The best filter combination is a bank of pre-filters, an individually DOP scan tested nuclear grade HEPA for radioactive fallout and a nuclear grade carbon adsorber that will adsorb radioactive iodine. 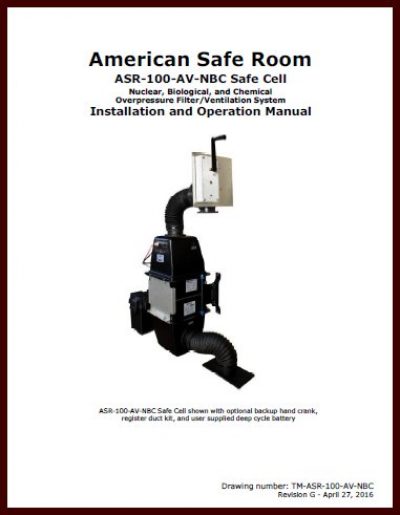 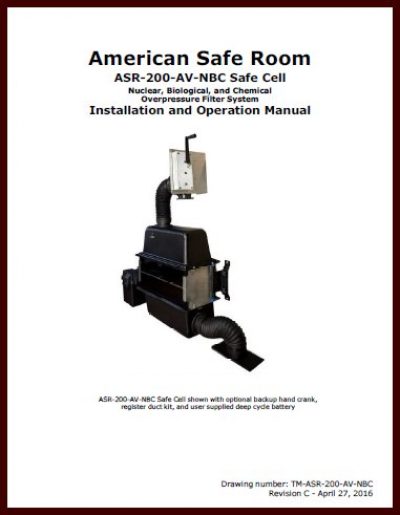 American Safe Room manufactures all of the critical components you need to outfit your safe room. From high security doors to NBC filters, we have everything you need right here: 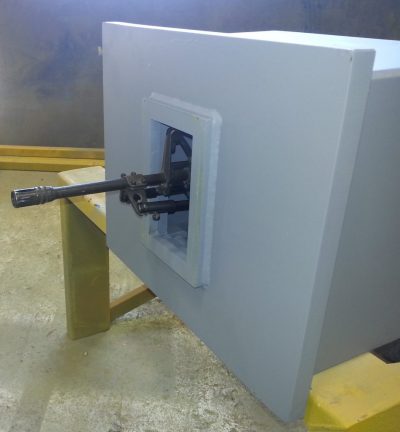 We manufacture both ballistic and blast doors

Our ballistic doors features a 3/8 inch thick ballistic plate that gives UL 752, level 8 protection – withstands multiple hits with 7.62 NATO ball. We can scale this up to 50 caliber AP (yes, armor piercing). We’ve made dozens of gun ports that stopped this round cold.

We use the same massive steel hinges with bronze bushings and grease zerks that we use on our blast doors.

They also feature a swinging gun port with an internal cam latch, a wide angle viewer on each side of the gun port, a pry-resistant steel lip around the door leaf, and a steel frame that is welded to the door for easy installation. 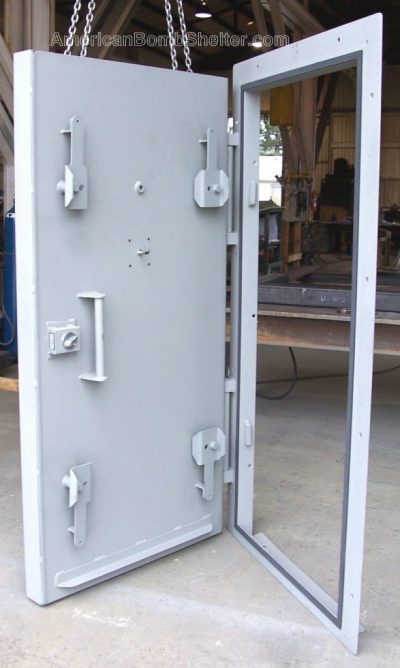 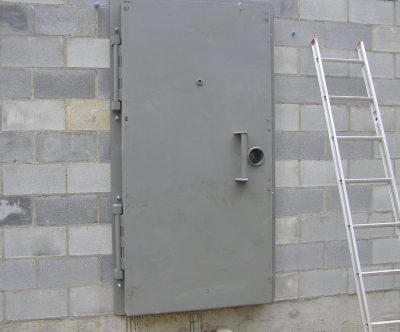 The steel envelope door leaf is shipped empty. After you mount the door in the rough opening, you fill it with 4,000 PSI concrete. This give you a door leaf that weighs 1,700 pounds. 7.62 NATO ball ammunition makes it about half way through, they are engineered certified for a 50 PSI blast, and cutting torches just need not apply with four inches of concrete fill.

Note the cam latch handles – on both the latch side and the hinge side. Blast doors are made to swing outward so they take the force of the blast in the seated condition. But if someone were to take the time to cut through the massive steel hinges with a torch, they could remove the door and gain entrance. Even if the hinges were cut, the two cam latches on the hinge side will keep the door in place. We also provide wall capture brackets with this option that weld onto the frame and wrap to the inside wall where they are bolted in place. This put six concrete wedge anchors inside your shelter – where they can’t be attacked. 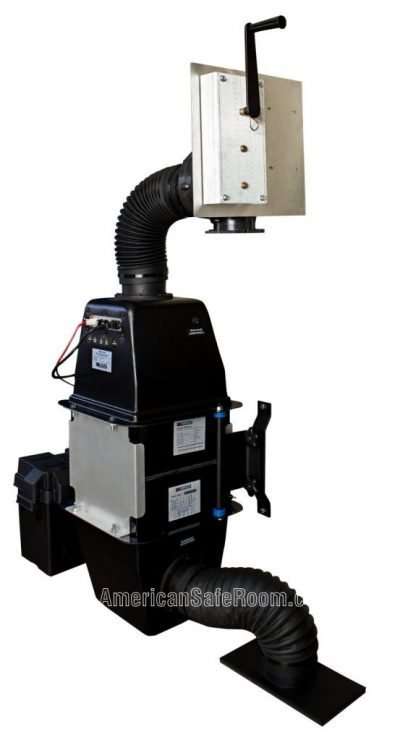 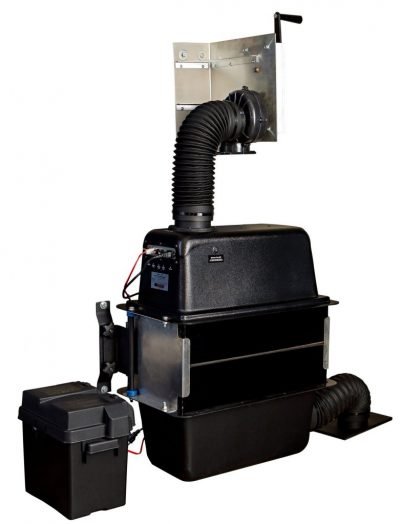 Your safe room is only as secure as the air you breath. You need a full spectrum nuclear, biological, and chemical air filtration system in your protected space.

American Safe Room manufactures the Safe Cell line of NBC air filtration systems. The AC and DC Safe Cells are the only NBC air filters available that features an onboard battery backup system that automatically switches to a user supplied battery if the grid goes down – maintaining overpressure in your safe room. 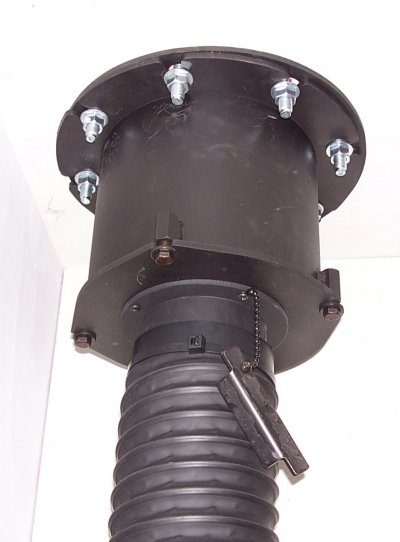 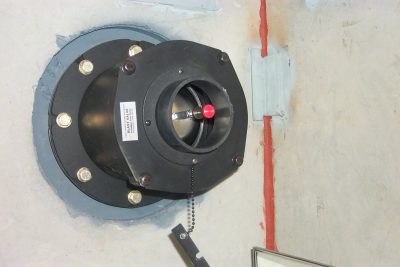 Blast valves are heavy steel pressure vessels that mount over the ventilation pipes in a safe room. They close if a detonation occurs nearby, then re-open to allow the NBC air filtration system to keep providing airflow.

Our blast valves shut automatically for both pressure and vacuum. They feature lightweight valves that have an extremely fast closing time. When an detonation occurs, the atmosphere is blown outward, leaving a near-vacuum void. This void expands outward until the mass of the atmosphere overcomes it. If you’ve ever seen footage of trees blowing one way, then the other after a detonation, that’s the first two phases of a blast – positive and negative pressure. You need double acting automatic blast valves in your safe room.

Our blast valves also have a manual lock shut function. This is in case there is a structural fire outside your safe room or a malicious person dumping fuel down your vent pipes. Structural fires have a thermal element (heat) and produce massive amounts of carbon dioxide. If you are trapped in your safe room during a fire, turn off the Safe Cell and lock the blast valves shut for a few hours.
Blast valve product page 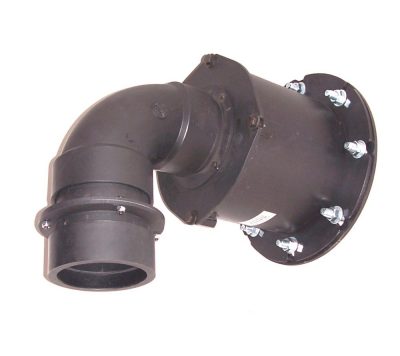 These are one way check valves that mount on the outflow blast valve. We manufacture both  and adjustable overpressure valves. 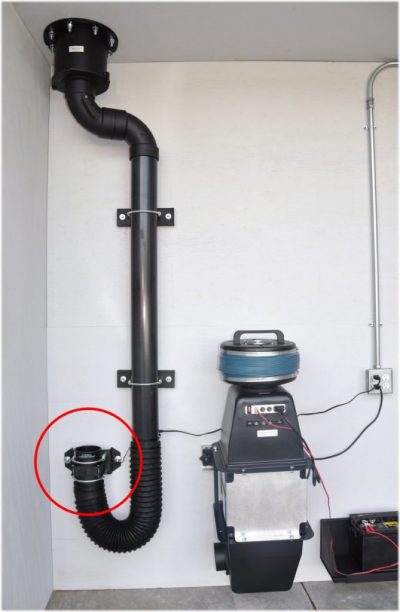 It also comes with an automatic timer so you can set it to come on every day and freshen the air and relieve the condensation in your safe room.
Automatic ventilation blower product page 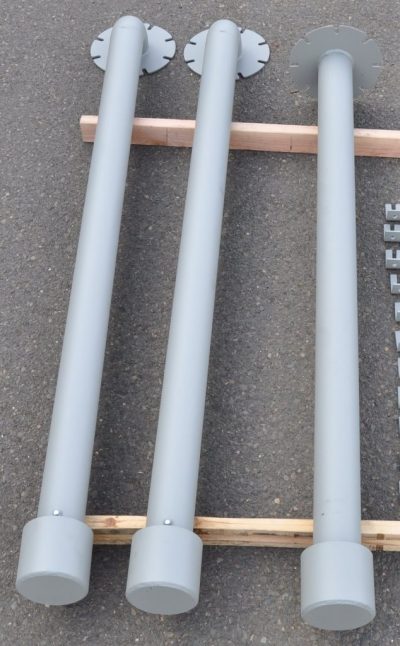 We fabricate steel ventilation pipes to order. They bolt on to the outside of a safe room with concrete wedge anchors and a gasket. The top end features a rain hood with an insect screen inside of it held on with a security fastener.

To get proper ventilation, you need to bring air in, filter it, then return it from where you took it. The best place to take it from is outside – where there is a never-ending supply of oxygen.

The intake should be mounted on the opposite corner or wall from the outflow so the filtered air has to transit the entire shelter before it’s kicked back out. This will help remove the carbon dioxide and moisture the occupants exhale.
Ventilation pipe product page 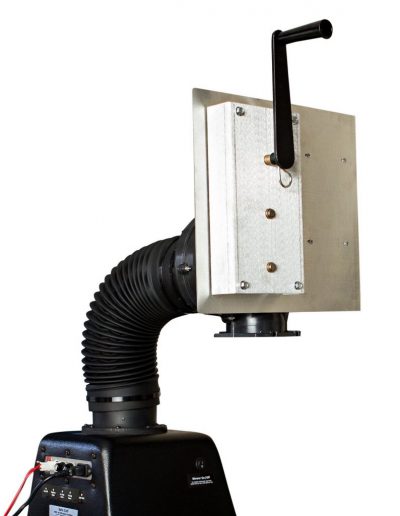 For long term power outages, you need a way of replenishing the oxygen in your safe room that is sustainable without electricity.

We manufacture a geared hand crank that will draw 60 CFM of air through the Safe Cell. It mounts at a comfortable height and is easy to operate.
Backup hand crank product page 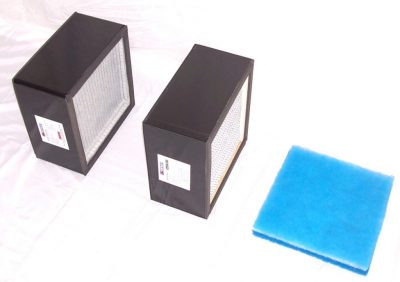 Every safe room should have a reload of filters. The Safe Cell has a unique and very safe filter replacement protocol.  Due to its lightweight construction and how easy it dismounts from the wall, the entire unit is taken outside, the filters replaced, it’s sealed back up and brought back in. The old filters are left outside.
Replacement filters product page 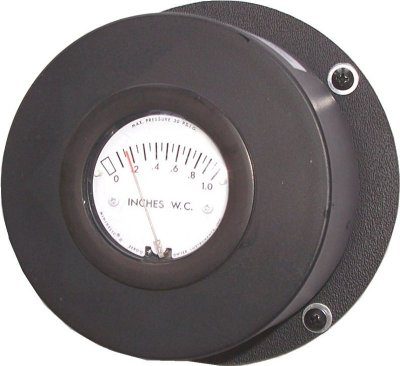 Know you have positive pressure (overpressure) in your safe room. This gauge give you a continuous reading of the difference in pressure between the protected space and the outside.
Differential pressure gauge product page 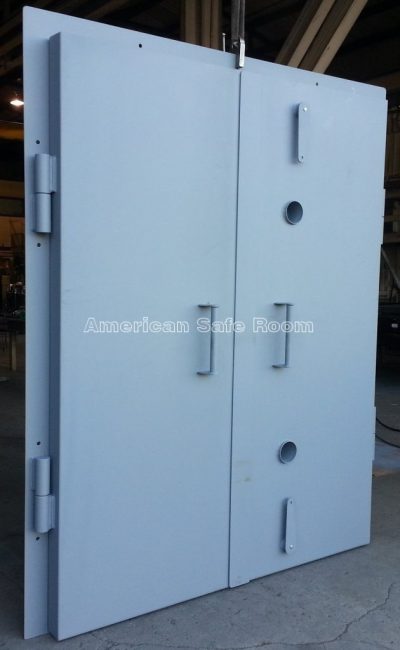 These are two doors mounted in one frame. They allow vehicles and equipment to be moved into garages and shops and feature the same massive hinges and secure cam latches of our single leaf doors.
Double leaf concrete filled blast door product page